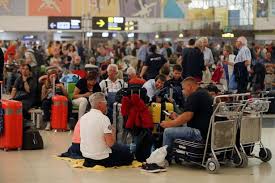 British holidaymakers who spent three days stranded abroad due to a sandstorm have been flown back to the UK by Jet2 airline but without their bags.

Those who were unable to travel on Sunday saw their replacement flight to East Midlands Airport on Tuesday diverted to Malaga.

After arriving in England late on Wednesday, some said they “still have no idea” where their luggage is.

Jet2 said it had worked “tirelessly” to bring passengers back to the UK.

The rescheduled flight landed back in the UK at 23:53 GMT on Wednesday – three days after the passengers were originally set to return home.

Passenger, Mick Elliot, from Aylestone, Leicester, said he had still not been reunited with his luggage.

Mr Elliot, who filmed the crew’s announcement on his phone, said passengers felt they were “left in limbo”.

“Despite Jet2 saying they did all they could, the majority of passengers disagree,” he said.
“We should have got home on Sunday but arrived on Wednesday. Between that time normal scheduled flights to East Midlands were on time.

“We still have no idea where our luggage is or when we will get it back,” said Mr Wain, 45, from Mansfield, who was on holiday with his son and wife Nicole.

“The resort which we were shipped to was very good and couldn’t do enough for us but when you’re stuck in the clothes you’re wearing from the previous day, knowing you’re travelling back later that day with hours to kill, makes the whole episode a little uncomfortable.”

Another holidaymaker, who chose to remain anonymous, said passengers were left with “zero information” for seven hours on Tuesday before the flight.

Jet2 said it was “making sure that all baggage is flown back to the UK as a matter of priority”.

In a statement, it apologised to affected customers.

It said the backlog of flights out of Tenerife, caused by the sandstorm, had resulted in “delays and problems processing baggage”.

“As a result, our crew did not have sufficient operating hours to fly from Tenerife to the UK due to CAA Flight Time Regulations,” the company said.

“All UK passengers have now returned to the UK.”