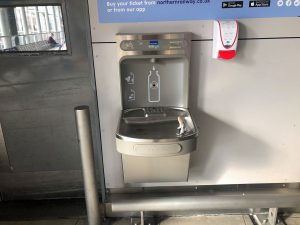 Passengers using Leeds railway station have helped to prevent over 1000 single-use plastic bottles* from being used through utilising a water refill point which was installed last month.

The refill point, which can be found on the main footbridge near the escalators which lead to platform six, has been installed at the station as part of the upgrades which are taking place there. Free water fountains can now be found at all 20 of Network Rail’s managed stations and Network Rail is working to install a second refill point at Leeds station, which will be located near the toilets on platform eight.

Nick Cooper, Leeds Station Manager for Network Rail, said: “Network Rail has a big role to play in tackling plastic pollution. We know that passengers share our passion for reducing single-use plastics, so it’s important that we make it as easy as possible for them to refill throughout their journey.

“The installation of this refill point helps them to do just that and we are absolutely delighted that it has been used by so many passengers in one month. We are working hard to install a second refill point at the station, which will help to prevent the use of even more single-use plastic bottles.”

Network Rail is currently carrying out significant work to upgrade Leeds railway station. Work is well under way on the construction of a new platform, platform 0. which will allow more trains into the station, improving connectivity and creating a more resilient railway. Last year, a major project to replace the old, wooden roof over the main concourse with a new, transparent one successfully completed. The work has transformed the area, making it much brighter and more pleasant for passengers.