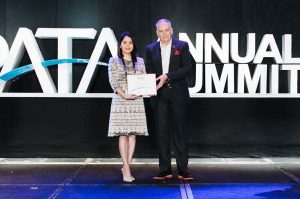 The Pacific Asia Travel Association (PATA) has presented a series of awards to several individuals in recognition for their contributions to the responsible development of travel and tourism in the Asia Pacific region.

“The PATA Annual Summit is the perfect opportunity to recognise industry leaders that have contributed to the responsible development of the travel and tourism industry. This year’s recipients embody the spirit of collaboration and cooperation that is essential to the success of the industry,” said PATA CEO Dr. Mario Hardy. “I would like to congratulate all the winners for their valuable contributions and also thank them for their continued support to both PATA and the travel and tourism industry.”

Furthermore, she was President for the Indonesia–Australia Business Council (2004 – 2006) and the Asean Tourism Association (2009-2011). Today, Elly is still a Board Member of PATA, and President both at the Association of Ticketing Agents in Indonesia (ASTINDO) and the Professional Certification Body-Air Transport Distribution Services and Agencies.

Dato’ Haji Azizan Noordin was the former Chief Executive Officer of the Langkawi Development Authority (LADA) and oversaw its operation and management with three strategic thrusts of tourism, investment and community development.

He began his career in the tourism and hospitality industry with the Tourist Development Corporation Malaysia, now known as Malaysia Tourism Promotion Board, as a Tourist Officer in 1978. He has since served in various leadership roles including heading the Tourism Malaysia overseas offices in Seoul, Korea (ROK) and Jeddah, Saudi Arabia.

Dato’ Azizan Noordin retired from Malaysia Tourism Promotion Board (Tourism Malaysia) when he was the Deputy Director General (Promotion). He was responsible for overseeing the operations of the organisation and the promotional efforts all 44 Tourism Malaysia overseas offices. He led Tourism Malaysia sales missions overseas and has been a key speaker at many international tourism seminars and conferences.

The PATA Face of the Future award for 2019 was presented to Ms Flori-Anne Dela Cruz, youth representative to the Guam Visitors Bureau (GVB) Board of Directors. This award is presented annually to an exceptional ‘rising star’ in the industry, having exhibited initiative and leadership in the advancement of tourism as well as demonstrating a commitment to the sustainable development of the Asia Pacific travel industry in line with PATA’s mission. It is the most prestigious honour for young tourism professional in the Asia Pacific region.

Ms Flori-Anne Dela Cruz, was recently appointed by the newly elected Honourable Governor of Guam, Lourdes Leon Guerrero, as the youth representative appointed to the GVB Board of Directors. She is currently employed as a marketing specialist at ASC Trust, the largest provider of retirement plan management services in Micronesia.

The PATA Honorary Membership Award was awarded to Ms Bernadette Romulo-Puyat, Secretary, Department of Tourism, Philippines, as recognition to the host of the PATA Annual Summit 2019.