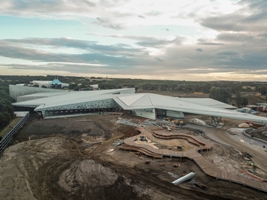 The new visitor centre offers fun and interactive activities for the whole family, including the interpretive habitat space which provides a ‘penguins-eye’ view of the world, complete with life-size grass tussocks and cinematic projections. There is a state-of-the-art theatre, a dedicated education wing, and a range of dining and retail options. Australia’s largest colony of Little Penguins will benefit from a key aspect of the development with the restoration of more than six hectares of penguin habitat on the site of the old visitor centre and coach parking areas, creating homes for an additional 1,400 breeding penguins.

Minister D’Ambrosio was excited to announce that the Penguin Parade visitor centre will also eliminate all single-use plastics throughout its food outlets, building on the Labor Government’s ongoing work to reduce the amount of plastic entering our waterways and environment.

The centre’s overall environmental credentials are impressive, with an array of 666 solar panels on the expansive roof, a water filtration system to recycle rainwater for non-potable use, increased roof and floor insulation, and double-glazed windows. Low carbon building materials have been used throughout the centre’s construction, including sustainably sourced Victorian Ash hardwood for the impressive laminated beams.

The star-shaped building sits between three distinct landscapes on the Summerland Peninsula, the site of a historic buy-back scheme which saw an entire residential estate bought back and returned to wildlife habitat. The centre’s architectural inspiration and form combines elements of the Peninsula’s basalt bluff, coastal dunes and wetlands.

Its spectacular architectural design has already been acknowledged internationally, having just been announced as a winner at the 2019 International Architecture Awards, out of a field of over 380 submissions from 41 countries.

The development was made possible through funding of $48.2 million from the Andrews Labor Government, along with a $10 million contribution from Phillip Island Nature Parks.