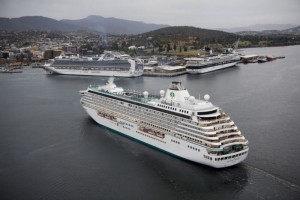 The cruise shipping industry is developing continuously and rapidly in the areas of Tasmanian National Park, but there is a petition to ban the cruise ship entering from the embankment.

There are about 125 ships are scheduled to dock in Burnie and Hobart this year. There are twenty-nine of those ships will make a stop at Port Arthur and six will drop anchor off Freycinet and Wineglass Bay on the east coast.

A petition is circulating calling for the State Government to ban large cruise ships from entering waters around the national park.

The petition also calls for an exclusion zone to be set up for all Tasmanian National Park areas.

The petition has collected just over 12,000 signatures. Dr Sue Beeton, professor of tourism at William Angliss Institute, said managing the expectations of tourists and locals alike was a challenge for the cruise industry and governments nationwide.

The rise in cruise ship visitors to areas such as Port Arthur has been welcomed for increasing the tourism dollars being injected into the world heritage site. But there have been concerns about the environmental and visual impacts of ships in other areas of Tasmania. In Hobart, the concerns have been raised about the environmental and health impacts of low-grade fuel being burnt while ships are in port.