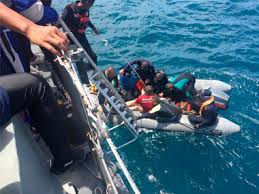 There are travel concerns across the country following the tourist boat accident in Thailand’s Phuket island, which killed 41 Chinese tourists.

According to Thai authorities, five of the 11 missing passengers (including nine Chinese) are alive, with their exact location to be further verified. There were 87 Chinese passengers on board when the boat was hit by a storm. 41 died and 37 survived.

More than 100 Chinese tourists have cancelled a one-day tour at sea off Phuket island as of Sunday.

However, a tourist guide said on Monday that trips of tourists currently in Thailand have not been affected too much.

Nine boats set out from Phuket on Monday at 8:00 am with passengers on board mostly from China despite the terrible accident, with storm alerts still active.

Thai authorities raised on Saturday a high tide alert, warning of waves from two to three meters in the Andaman Sea from July 7 to 12, but a “boats can set out” flag remains hoisted at Chalong pier.

An unnamed tour guide from Beijing said her guests travelling to Thailand remained calm after the accident and continued with sea tours. However, the tragedy has ignited safety concerns online.

Netizens wrote on social media that they would not visit Thailand and blamed Thai authorities for the accident and the untimely rescue efforts.

Many long-tail boats that carry passengers off the island for diving activities were not maintained well, as their engines frequently malfunctioned and were hastily repaired to catch the early hours for sailing, a newspaper reported Monday.

Boatmen told the People’s Daily that many boats with potential safety hazards set out every day to save on operating costs.

China’s embassy in Thailand handled 84 cases of irregular deaths in 2017, including 61 drowning cases, people.cn reported. Those mainly happened at sea in southern Thailand, including Phuket.

Official data shows that Thailand has been one of the preferred choices for Chinese tourists. A total of 9.8 million Chinese visited the country in 2017, an increase of 12 percent compared to 2016.