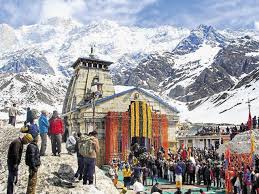 The quiet town of Kedarnath in the northern state of Uttarakhand, once a haven for pilgrims, is abuzz with the sound of helicopters. Hundreds of tourists are ferried on these helicopters throughout the day. On some occasions, as many as 300 sorties are made in a single day.

According to the draft tourism policy 2017 of the Uttarakhand government, the number of tourists visiting Uttarakhand has consistently increased from around 11 million in 2000 to 28 million in 2012.

In 2018, an unprecedented 30 million tourist arrivals are expected in the state, many of them domestic tourists to the important Hindu pilgrimage circuit of Char Dham in Uttarakhand.

Uttarakhand, popular for its Hindu pilgrimage sites, attracts spiritual seekers from around the world. Known as Devbhoomi (land of Gods), the state, while recovering from the 2013 floods, is now also reeling under the pressure from unregulated tourism and the infrastructure to support it.

The hill state, specifically the Kedarnath Valley, witnessed horrifying destruction in the June 2013 floods. However, that hasn’t kept tourists at bay. While there was a slight dip following the tragedy which killed nearly 6,000 people (as per official sources), the number of tourists have picked up again.

The largely unregulated influx of tourists into the highly disaster-prone state seems to be taking a toll on the fragile ecosystem.

Several reports on the the June 2013 floods stressed the need for regulating tourists coming to Uttarakhand to avoid repeated disasters. But the idea to regulate the high number of tourists and adopt sustainable tourism practices still remains on paper.
The analysis of tourists coming to the hill state also reveals that among the foreign tourists, nearly 58 percent of the visits were for holiday/sightseeing, 21.9 percent for health/yoga and about 19.4 percent for pilgrimage/religious functions.

But among domestic tourists, the main purpose remains pilgrimage as Uttarakhand is home to several pilgrimage sites like Char Dham – Yamunotri, Gangotri, Kedarnath and Badrinath − and Hemkund Sahib. The report noted that about 44 percent of the domestic tourist visits were for pilgrimage. Uttarakhand’s Char Dham yatra starts in April of each year and ends in November when the temples close for the winter.

Following the 2013 disaster it saw a dip but by 2015 the number was near 25 million. In 2018, it is expected to break all previous records and cross 30 million tourist arrivals – almost three times the population of Uttarakhand itself. By 2026 the number of tourists is expected to touch a whopping figure of 67 million.