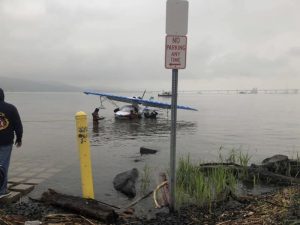 In New York City, a helicopter contracted by Blade which is an on-demand short-distance flight service crashed into the Hudson River. There were no life-threatening injuries faced by the aircraft’s pilot who was the only person on board.

A Blade representative further confirmed that a helicopter made a safe emergency landing on floats in the Hudson River near the heliport.

The pilot made an emergency exit and was not injured and as per the local police the aircraft landed in the Hudson River near the West 30th Street after missing the landing pad.

According to Blade the helicopter was not servicing a Blade flight and was being repositioned by the contractor, Zip Aviation, to the West Side heliport for fueling when the accident took place.

No one could specify what forced the emergency landing and an eyewitness video revealed that the helicopter lost control before emergency rafts inflated as the aircraft descended towards the river.

In 2014 Bladed was launched it is billed as an ‘Uber for helicopter’ and provided New York City passengers a shuttle between the east and west sides of Manhattan.Other destinations like Martha’s Vineyard and the Hamptons were further covered.