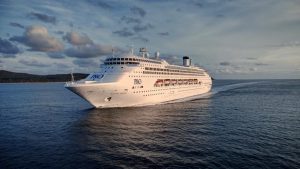 A P&O cruise ship has saved three men including two Australians, who were stranded on a life raft in the South Pacific near Caledonia on Thursday.

The three people were caught in the emergency situation soon after their yacht began taking on water. The authorities concerned contacted Pacific Dawn (P&O cruise ship) people and asked the authorities to divert the cruise ship from its path and rescue the struggling seafarers. The cruise ship was on its way to Brisbane. It was heading for its seven-night South Pacific trip.

Ben Johnson, who was among the three rescued seafarers, later told that their vessel ran into difficulties after a thick rope that was drifting in the ocean, fouled their engine and ripped a hole in their hull. “It was a panic situation for all of us as we had manual pumps, bilge pumps going non-stop,” he said. Johnson somehow contacted everyone he could get hold of at that time in the morning. Johnson’s wife contacted an agent in the New Caledonia who alerted P&O authorities. Thereafter, the P&O cruise ship was soon on its way to rescue the three men.

“Our yacht sank into the depths of the Pacific Ocean soon after the rescue vessel from the cruise ship was retrieving us,” said Johnson adding that he was looking at spending the whole night at sea but had to spend two-and-a-half hours in the life raft.

Pacific Down was carrying 2,000 people at the time when it was approached for rescuing the seafarers. A Facebook post from P&O cruises says that Marine rescue authorities had asked Pacific Down to divert from its path and save the seafarers. President of P&O Cruises Australia Sture Myrmell said that Pacific Down and her crew followed the finest traditions of the sea by going to the aid of fellow seafarers in peril on the sea. Myrmell said that they were happy that all the three seafarers were safe