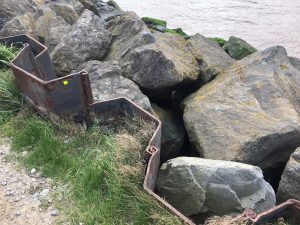 The path has been closed since December to allow Network Rail engineers to install additional rock armour to protect the railway from coastal erosion. The work was necessary to stabilise ground movement which was detected last year. Network Rail will continue to monitor the area.

Rob McIntosh, Route Managing Director for Network Rail, said: “We know that this is a popular footpath, so we are pleased to announce that it it has now reopened and people can use it once more.

“We understand that there is never a good time to carry out work like this, however this work was vital to keep trains running reliably and safely.

“We would like to take this opportunity to thank residents for their patience whilst this important project took place.”

Network Rail is currently working on plans to carry out a permanent fix with further details to be announced in due course.