A popular Italian beach is soon to introduce ticketing 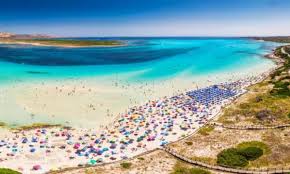 Tourists who are interested to soak up in the sun at one of the most popular beaches of Italy will soon have to buy a ticket to do so.

Visitors moving to the La Pelosa beach of Sardinia may have to plan in advance as the beach will start limiting its visitor capacity to 1,500 per day and will charge admission upon entering. Town officials have not yet disclosed the entry cost or when exactly it will come into practice, but the limited capacity rule will go into effect next summer.

The beach is frequently known as world’s one of the most beautiful coastlines, well-known for its blue waters and soft sands. Nevertheless, the beach’s ecosystem is in jeopardy because of overcrowding. Money accumulated from the ticket sales will go straight towards preservation, according to the Italian newspaper Sassari Oggi.

“We have started the process of properly using Pelosa Beach, focusing on its preservation. The fact that the region has funded the first beach redevelopment projects demonstrates its importance and value,” public works commissioner Antonella Mariani told the newspaper.

Visitors are by now prohibited from accompanying towels and beach bags to the coastline to keep as much sand as possible from straying away in belongings. Also, smoking and selling items are prohibited on the beach.

The beach is far from the only attraction in Italy that has initiated ticketing system for entry. Venice expects to start a similar system as it encounters overtourism.

Cinque Terre, the popular town debated of imposing caps on the number of tourists who could visit every day. Instead, the town partnered with those nearby to redevelop tourist flow and introduced an app to inform people when the town’s seaside trails are in danger of overcrowding.