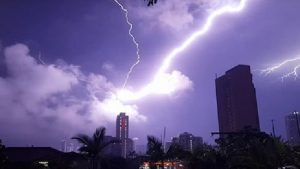 An enormous band of wild storms stretching from the Sunshine Coast down to Byron Bay has dumped up to 105mm of rain in just one hour, causing widespread commuter chaos and power outages.

The aftermath of Friday’s storms continued to wreak havoc across the region late into the night, with several flights cancelled or diverted, train delays remaining at 9.20pm and almost 14,000 homes still without power at 10pm. At the height of the storm more than 23,000 residents were without power in the state’s southeast.

The Bureau of Meteorology cancelled its latest severe storm warning for the Sunshine Coast at 8.45pm although a more general thunderstorm warning remained. The large band of storms, which earlier threatened to bring ‘giant hail’, brought hail, thunder, lightning, heavy rain and flash flooding, caused up to 75 minute delays to Brisbane’s transport network and sent gazebos and tents at the CMC Rocks event at Ipswich flying.

The loud claps of thunder and incredible bolts of lightning were reported across the region in the height of the storms.

The flights were delayed across Brisbane, Gold Coast and Sunshine Coast airports, with one passenger on a flight to Sunshine Coast saying it was the “scariest flight I’ve ever been on”. The flight from Melbourne reportedly experienced severe lightning and was ‘very bumpy’ and was diverted to Brisbane and could not land and was subsequently diverted to the Gold Coast. It was also reportedly the first flight able to land on the Sunshine Coast in two and a half hours. TransLink had reported all train services on the southeast Queensland network were delayed by up to 75 minutes. All council-run bus services were back to normal by about 8.15pm after experiencing delays of up to an hour.

The storms brought huge downpours to several areas. Delaneys Creek received 105mm of rain in an hour, 85mm fell in an hour northwest of Samford near Dayboro, 86mm fell in one hour at Kobble Creek, 76mm fell in one hour at Kallangur and 3cm hail was reported near Oakey.     Emergency services had received more than 70 call-outs related to the storm between 2pm and 5.30pm. The latest storm warning from the Bureau of Meteorology was issued at 7.55pm for parts of the Sunshine Coast. This was cancelled by 8.45pm, with the BoM saying “heavy rain in thunderstorms” had eased and while rain and thunderstorms were persisting, they were no longer expected to be severe.

A separate thunderstorm warning remained for people in parts of Central Highlands and Coalfields, Wide Bay and Burnett and Southeast Coast areas.