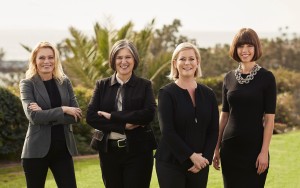 Lindsey Ueberroth, Chief Executive Officer of Preferred Hotels & Resorts —the world’s largest global provider of sales, marketing and distribution services to independent luxury hotels — today announced three executive appointments that mark a significant shift in the leadership structure of the family-owned and operated-company: Michelle Woodley has been promoted to President; Kristie Goshow has been named Chief Marketing Officer; and Caroline Michaud has been promoted to Executive Vice President, Corporate Communications & Public Relations. With the luxury hospitality company celebrating its 50th anniversary milestone this year, these appointments come at a pivotal moment in Preferred Hotels & Resorts’ history and signal the Ueberroth family’s strategic focus on driving growth and innovation to ensure future decades of success for the Preferred brand.

“With a goal of positioning Preferred Hotels & Resorts as the world’s most recognized independent hotel brand globally, we have made the strategic decision to harness the skill set of experts in key functional areas outside of our family, which will allow us to augment our existing strengths and better position our company on a global scale,” said Ms. Ueberroth. “I am very proud to have three dynamic, talented women take over vital leadership roles within the company.”

As President, a position previously held by Ms. Ueberroth, Michelle Woodley now oversees multiple departments across the company including sales, marketing, IT, revenue management, and customer relations. She will also work closely with Ms. Ueberroth on financial planning and talent management, support the development of other strategic areas of focus within the organization, and serve as a company spokesperson. During her 15-year tenure with Preferred Hotels & Resorts, Ms. Woodley has held a variety of positions including Senior Vice President of Global Marketing Strategy, Senior Vice President of Revenue Management & Distribution and, most recently, Executive Vice President. In those roles, she helped the company execute on pivotal campaigns including its rebranding from IndeCorp to Preferred Hotel Group in 2005, which marked the debut of the pineapple – the global symbol of hospitality – into the company’s logo; launched all aspects of the I Prefer Hotel Rewards program in 2006, including materials, hotel training and education, website, and back-end technology; and drove various strategic efforts that generated more than $1.35 billion in room reservations revenue to member hotels– a record for the company – in 2017. Prior to joining Preferred Hotels & Resorts in 2002, Ms. Woodley spent more than 10 years holding various senior positions in marketing, operations, and distribution for international hotel chains such as Swissôtel and Raffles Hotels & Resorts.

Kristie Goshow joined Preferred Hotels & Resorts as Chief Marketing Officer, effective February 1, 2018, taking over the responsibilities previously held by Casey Ueberroth. In this role, she leads the company’s global marketing strategy, responsible for driving revenue, brand awareness, and engagement through the I Prefer Hotel Rewards program, all brand, regional, and cooperative marketing efforts, and e-commerce and digital marketing initiatives. With 20 years of vast global experience, Ms. Goshow has led teams across the airline, hospitality, and travel technology spaces for companies such as Sabre Hospitality, Jumeirah, and, most recently, Viceroy Hotel Group, where she was responsible for managing the company’s brand marketing, digital, distribution, international sales, and technology strategies as Senior Vice President of Commercial.

In her new position as Executive Vice President, Corporate Communications & Public Relations, Caroline Michaud drives the global integrated media relations strategy for Preferred Hotels & Resorts, defines the voice behind messaging campaigns for the company’s executive team, with a focus on Ms. Ueberroth’s communications, and is responsible for the company’s intranet and extranet channels. Since joining Preferred Hotels & Resorts in 2012 as Senior Manager of Public Relations for the Americas, Ms. Michaud has orchestrated several extensive media campaigns to elevate the company’s global profile among trade and consumer audiences including its rebranding from Preferred Hotel Group to Preferred Hotels & Resorts in 2015 and the introduction of the innovate points-based structure of I Prefer Hotel Rewards in 2013. Previously, she worked at progressive travel- and hospitality-focused public relations agencies in New York City and Chicago.

Since its foundation on January 29, 1968, the Preferred brand has led the way in independent luxury hospitality. In the 14 years since the Ueberroth family took ownership, the brand has accelerated its expansion by marking first-time presence in more than 30 new countries; doubling the size of its global portfolio, which included the debut of a collection of luxury residences; introducing new technology, sales, and marketing support services to its growing portfolio of member hotels; launching I Prefer℠ Hotel Rewards, the world’s first global points-based guest loyalty program for independent hotels; and curating a variety of other niche programs to cater to the needs of family, LGBT, and golf travelers.