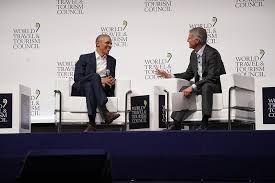 When he’s not giving power to the world’s youth via the Obama Foundation or working on his impending memoir, the former President of the US, Barack Obama is ticking off destinations from Bali to the private island of Richard Branson.

The ex-president is a passionate believer in the power of travel to expand worldviews of the people and break down geopolitical barriers. And before this week, at the World Travel and Tourism Council Global Summit, he shared some of his wisest opinions on the subject in Seville, Spain.

In a conversation with Hilton CEO, Christopher Nassetta, Obama commended the ability of travel in reminding people of the value of diversity in the middle of growing xenophobia and nationalism.

“I believe in bringing people together instead of separating them out as us and them,” Obama said. “If we try to reassert hard, fixed borders at a time when technology and information are borderless, not only will we fail but will see greater conflict and clashes between peoples.”

As change in climatic conditions, political upheaval, and biases reinforced by social media rank among his major anxieties, Obama remains positive in terms of the younger generation’s commitment toward change.

“Young people are innovative, smart, creative, idealistic, and ready to go. They understand, instinctively, that this is one world,” Obama said. “National boundaries and ethnic and religious differences don’t prevent them from learning from and collaborating with other people; the politics of looking backwards and erecting walls is a politics that is not going to appeal to them. They fundamentally reject it.”