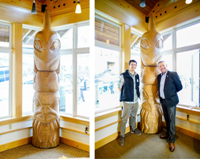 To thank the local community of Ketchikan, Alaska for supporting Princess Cruises over the last 50 years, the cruise line recently hosted a special golden anniversary ceremony at the Ketchikan Visitors Bureau to dedicate a specially-crafted totem pole to this charming coastal town.

The Masters of the Sea totem pole, now permanently housed at the Ketchikan Visitors Bureau, was crafted by local carver, Kelly White. In addition to his role as a carver, Kelly also serves as Princess Cruises cultural ambassador of its “North to Alaska” program. In fact, as part of the “North to Alaska” program, Kelly carved the totem pole onboard Ruby Princess and Grand Princess for guests to see and learn more about Alaska’s culture.

Inspired by strong and important sea creatures, the totem pole features a killer whale, a powerful hunter and navigator of the seas; an octopus, a mysterious, intelligent and complex creature of the seas; and halibut, a proven reliable food source throughout the year.

“We’re proud to dedicate this beautiful totem pole, inspired by the sea, to the community of Ketchikan, visible long after our cruise ships depart each season,” said Lisa Syme, vice president of marketing at Princess Cruises. “We hope it reminds the local residents of Ketchikan of the key role they play in introducing the culture and passion of Alaska to our guests. We’re grateful to Kelly White for his incredibly talented craftsmanship.”

A local resident of Ketchikan, White is a Northwest Coast artist who is Teikweidí, Sanyaa Kwáan of Tlingit descent. As a guide at the Totem Heritage Center, located in Ketchikan, he has shared his knowledge of traditional art and culture with visitors from around the world for several summers. He’s a committed carver, teaching himself using books and other research references and practicing independently, as well as receiving instruction of other experts. In 2011, he was invited to help carve the Sitka National Historical Park Centennial Pole.

In the last 50 years, Princess Cruises has brought more than 5 million guests to Ketchikan, more than any other cruise line, where they have enjoyed the colorful galleries, the quaint buildings of Creek Street, Great Alaskan Lumberjack Show, sea planes and artfully crafted totem poles.

As the leading cruise line in Alaska, Princess Cruises just celebrated its 50th year sailing to the Great Land with its largest deployment ever and introduced new entertainment, shore excursions and culinary offerings to the award-wining “North to Alaska” program. The cruise line also recently marked the debut of Royal Princess on the West Coast and the first time a Princess MedallionClass ship is sailing in this region. Powered by the OceanMedallion, the most advanced wearable device in the global hospitality industry, MedallionClass ships deliver a hassle-free, personalized vacation that gives guests more time to enjoy what they love most about cruising.