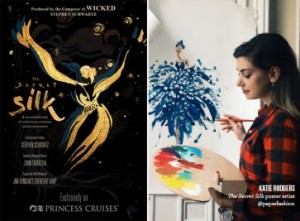 Princess Cruises today revealed the artwork for “The Secret Silk,” the third production created in collaboration with Oscar-, Tony- and Grammy award-winning composer Stephen Schwartz (“Wicked”, “Pippin”, “Godspell”). Created by Katie Rodgers of Paper Fashion, the “The Secret Silk” artwork was commissioned specifically to reflect the whimsical nature of the production.

A remarkable tale of adventure, romance, and enchantment that features familiar music and brings together some of Broadway’s best to transport audiences onboard, the new show was created and directed by Tony Award-nominated John Tartaglia (“Avenue Q”, “Sesame Street”).  “The Secret Silk” debuts exclusively on Royal Princess starting in mid-February 2018, while the ship is sailing the Caribbean.

“The Secret Silk” is the story of an Asian folkloric tale with a contemporary spin, featuring inspired performances through the use of music, dance, puppetry and special effects. Adapted from the ancient fable “The Grateful Crane,” the story features Lan, a beautiful, selfless young woman who possesses a magical gift, secretly creating brilliant silk fabrics. Audiences will be introduced to original life-size puppetry from Jim Henson’s Creature Shop, and an original song, “Sing to the Sky,” both created exclusively for the production.

“Working on the poster design for The Secret Silk has been a wonderful creative opportunity,” said artist Katie Rodgers. “I love taking a script and seeing where the words take me artistically.  ‘The Secret Silk’ has an air of mystery to it which I love to recreate with my paintings.”

Rodgers is the artist and illustrator behind the fanciful world of Paper Fashion. Since childhood, Rodgers has been bringing her imaginations to life through fantastical artwork which effortlessly dances around the tiles of Instagram. Known for her elegant and often animated Shadow Dancers, her work has been commissioned by the likes of Cartier, Jaeger-LeCoultre, Estee Lauder, Perrier Jouet, Disney, Focus Features, Harper’s Bazaar, and Swarovski, among others.

John Tartaglia, (Creator and Director) an American puppeteer, actor, singer, dancer, voice artist, and comedian, whose theatre performance credits include a Tony Award nominated Broadway debut in “Avenue Q,” “Beauty and the Beast,” and “Shrek The Musical.” His acclaimed off-Broadway, national and international touring show “ImaginOcean” premiered in November as a new Jim Henson Company series on PBS entitled, “Splash and Bubbles”. John is also the host of SiriusXM On Broadway’s “Sunday Funday.”

Shannon Lewis, (Choreographer) is a veteran of 10 Broadway shows including starring in the original cast of “Fosse,” winner of the Tony Award for Best Musical. Choreography includes “Shrek the Halls,” “Joseph and the Amazing Technicolor Dreamcoat,” and “A Dog Story.”

Anna Louizos, (Scenic Designer) is a three-time Tony Award nominee with more than 18 Broadway shows to her credit. Currently her sets and costumes can be seen in “School of Rock” on Broadway, London, and the U.S. tour.

Clint Ramos, (Costume Designer) is a set and costume designer for theater and live events. He has designed over 200 shows on Broadway, both in the U.S. and internationally. He is the recipient of the Tony Award, Obie Award for Sustained Excellence, three Lortel Awards, the TDF Irene Sharaff Award, two ATW Henry Hewes Awards, and a Helen Hayes Award.

Kelly Easterling (Lighting Designer) leads Quantum Creative Studios with a focus on imagining, designing, and developing attractions, themed environments, experiences, and shows.  He has been the lighting designer for hundreds of productions across the country.

Danny Fiandaca (Sound Designer) has been a Los Angeles-based sound engineer for over 20 years and a sound designer for the last 10. He’s worked musical theatre productions across the U.S. and Asia and has sound designed more than 15 productions for Princess Cruises.

Aaron Rhyne (Video and Projection Designer) is a video and projection designer with offices in both New York and Los Angeles. His designs have been seen on stages around the world in over 100 productions of musicals, plays, operas, and dance performances.

Brad Ellis (Musical Director) is a former Los Angeles session musician who now orchestrates for major U.S. symphonies, and is best known as the curiously silent piano player on “Glee.”

Adam Gwon, (Original Song – Lyrics) is a composer and lyricist whose musicals have been seen around the world in more than 200 productions, including off-Broadway and in London’s West End.

Jihwan Kim, (Original Song – Music) is a composer and composition teacher based in New York. His works include “Cupid and Psyche” with lyricist Sean Heartley, “Cinderella After the Ball” and “The Nutcracker Sings” with lyricist Eddie Sugarman.

Jayson Raitt (Supervising Producer) is a Tony Award-nominated producer who has 20 years of creative development, management, and leadership experience.

In addition to “The Secret Silk,” Princess Cruises’ partnership with Stephen Schwartz has premiered “Magic to Do” and “Born to Dance” onboard select ships in the fleet. This theatrical partnership adds to the cruise line’s Come Back New Promise, a multi-million dollar investment to enhance the onboard guest experience, ultimately resulting in more transformative moments, lifetime memories and meaningful stories to share from a cruise vacation.