Princess Cruises will award Entertainer of the Year 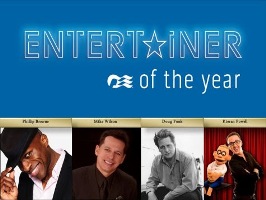 Princess Cruises will soon announce the top guest entertainer during the international premium cruise line’s eighth annual Entertainer of the Year competition. Four talented finalists have been chosen from the more than 2,000 onboard performers who entertain more than 2 million guests each year — from a talent pool of vocalists, comedians, magicians, tribute bands and other specialty acts.

Guests onboard the September 22, 2019 Star Princess seven-day cruise to the Northern California Coast will be invited to cast their vote for their favorite performer after viewing several live performances from each act during their cruise vacation, ultimately selecting Princess Cruises Entertainer of the Year and awarding the top talent $5,000.

The four nominees for the title of Entertainer of the Year are:

Phillip Browne – From London, Browne has starred in several West End shows and performed with Sir Elton John and Barry Manilow in some of the most prestigious venues in London, including Kensington Palace and the Royal Albert Hall. With a fantastic personality, strong stage presence and a rare velvet smooth bass voice, Browne is entertainment at its best. He started his career in the Disney production of The Lion King, playing the role of King Mufassa. He went on to perform in many West End shows including Show Boat, Anything Goes, Porgy & Bess, Piaf, Carmen Jones and Ragtime. Some of his TV & film appearances include Batman, Miss Marple, Eastenders, Casualty, My Family and Money. He is also a voice-over artist and can be heard on numerous movie trailers and commercials. Mr. Browne’s show includes songs by Barry White, Paul Robeson, Nat King Cole, Ray Charles, Sammy Davis Jr., as well as hits from The Lion King, Showboat and Carmen Jones.

Doug Funk – From Cambridge, Ontario Canada, award winning and two-time nominated comedian Funk is a seasoned performer with a fresh and contagious style, whose entertainment background has molded him into one of the most funny, thought-provoking and versatile comics in the country. He has four consecutive seasons on The Comedy Network to his credit, five seasons on the Global Network, two appearances in the very successful Air Bud movies (IV& V), countless TV commercials and hundreds of live performances in every nook and cranny of North America.

Kieran Powell – from Cirencester, Gloucestershire United Kingdom, comical singing ventriloquist Powell is without a doubt one of the UK’s finest variety acts and one of the world’s top ventriloquists. He has been described as “the act that every puppet’s talking about.” Over the past few years he has entertained tens of thousands of people with his truly original and highly imaginative award-winning act. He engages audiences with a combination of fast-paced comedy, creative interpretation of music and a fearless attitude towards audience participation and witty improvisation. Powell has been seen performing all across the world, from small-town halls to grand West End theatres, as well as over the last few years performing for some of the world’s top cruise lines. Ventriloquism has taken Kieran to 98 countries now, making him not only one of the world’s top ventriloquists, but one of the most traveled.

“Every year we’re so impressed with the incredible finalists who entertain our guests during our annual Entertainer of the Year competition,” said Denise Saviss, Princess Cruises vice president, entertainment experience. “It’s always a challenge to narrow down the vast array of talent we bring onboard and we’re thrilled that our guests will make the final decision.”

The finalists were selected by the Princess Cruises entertainment professionals based on guest post-cruise surveys and onboard audience responses. The Princess Cruises Entertainer of the Year winner will be announced on the final evening of the cruise at a celebratory event in the Piazza onboard the ship.

The eighth annual Entertainer of the Year voyage will depart on September 22, 2019 onboard Star Princess on a Northern California Coastal cruise, roundtrip from Seattle. Ports include Astoria, Ore., San Francisco, Monterey, Calif. and Victoria, Canada..