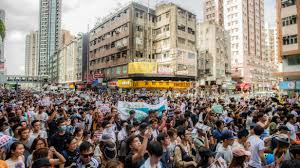 The tourism industry of Hong Kong is witnessing improbability and disquiet as political protests entered the eighth week with no signs of lessening in the coming days.

It’s not clear in which way the drama will further open out after Hong Kong and Macau Affairs Office, Beijing’s top policy body for the two cities, smash its stillness and slammed the protests at a press briefing Monday.

The last three days were quite stressful for the tourism players of Hong Kong. For the first time, tourism was utilized as a way to get the pro-democracy voice heard worldwide, as witnessed by the objections aided by the flight attendants union at Hong Kong International Airport last Friday.

Much to the respite of the sector, that became passive with no disruptions in airport operations. On Saturday, a march in Yuen Long, a small town near the border with China, however, witnessed a reported 24 people hospitalized. Displays and demonstrations in the central business district on Hong Kong island on Sunday, with tear gas from police.

Demonstrators are insisting on total removal of an extradition bill, greater democracy, an independent investigation of alleged use of hired hooligans by mainland China on July 22nd in Yuen Long, and for the city’s leader, Carrie Lam, to go.

In Hong Kong, tourism didn’t come to an idle position, but there is a reduction in business and a slower pickup pace for new bookings. However, the unstated concern is that tourism will come to a halt if China clamps down hard on the movement and another Tiananmen Square happens.

They believe that this year, the inevitability that earnings will be softer, particularly when even before the protests they were already impacted by the China-U.S. trade war and Brexit.

The U.S. and the United Kingdom., the top long-haul markets of Hong Kong showed stunted growth in the initial five months of the year over the same time 2018. Latest available figures from Hong Kong Immigration Department recorded a 1.7 percent increase in arrivals from the U.S. to 539,869 from January to May, and 0.1 percent from the UK to 258,559 visitors.