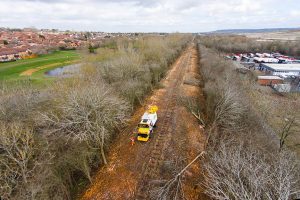 Plans for the East West Rail project will take a major step forward with the start of a public inquiry in Milton Keynes this week.

From tomorrow (Wednesday 6 February) for 12 weeks, planners will hear proposals for the first direct rail link in more than 50 years between Oxford and Bedford, and Milton Keynes and Aylesbury.

If approved, the line will connect communities and businesses to create more jobs, economic growth and sustainable housing – transforming the lives of residents for generations to come.

The East West Rail project is being built progressively in phases, and once constructed will create a world-class rail link connecting Oxford, Bicester, Milton Keynes, Bedford and Cambridge.

With phase 1 between Oxford and Bicester already complete, phase 2 involves track and signalling upgrades between Bicester, Bedford, Aylesbury and Milton Keynes, including the reinstatement of a ‘mothballed’ section of railway between Bletchley and Claydon Junction.

The proposed work will bring huge improvements to local travel, with the phased introduction of new rail journeys between:

Colin Murphy, head of consenting and environment for Network Rail working on the East West Rail project, said: “The start of public inquiry signifies a key milestone and phase of the consenting process. Our aim now is to ensure the planning inspector is presented with the information needed to examine and assess the merits of our proposals, against the views of others, on whether to recommend to the Secretary of State for Transport that the order should be made. When approved, Network Rail can initiate delivery of the main construction works.”

Councillor Mark Shaw, chairman of the East West Rail Consortium, which has campaigned for the reopening of this rail service since 1995, said: “After more than 20 years of campaigning, the start of the public inquiry is a key moment in the project’s history.

“The consortium will be appearing at the inquiry in support of East West Rail, which will provide new sustainable travel options and play a key role in helping realise the full potential of our economy.

“We are confident that the case for the investment is solid, but it is absolutely right that the inquiry examines the proposal in detail so that stakeholders and residents’ concerns are taken into account by the inspector, before a final decision is made.”