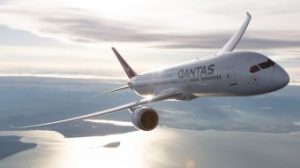 The first Qantas Dreamliner service from Australia to Hong Kong took off today, marking the first destination in Asia to be served by the airline’s Boeing 787-9.

QF29 pushed back from Melbourne just after 10am this morning and is scheduled to arrive in Hong Kong at 4.15pm (local time) later today.

The launch follows the arrival of Qantas’ eighth Dreamliner in November, joining the national carrier’s A330 and A380 aircraft that also fly to Hong Kong.

Customers travelling on selected Qantas flights to Hong Kong from Brisbane and Melbourne, and from Sydney next March, will experience the Dreamliner’s next generation seating in Economy, Premium Economy and Business class cabins.

Qantas has also re-timed one of its two daily flights from Sydney to Hong Kong from 31 March 2019, offering customers the choice of a midday or evening departure from Sydney.

QF117 will operate overnight and arrive into Hong Kong in the morning, providing more options for onward connections to other destinations in Asia, including those operated by Qantas’ new codeshare partner Cathay Pacific.

“Hong Kong is an incredibly important market for Qantas and we continue to see strong demand from premium and corporate travellers,” said Ms Webster.

“The introduction of the Dreamliner is designed to support that demand. It’s an aircraft people really enjoy flying on, so we’re pleased to share the experience with more customers across our network.

“We also expect the new overnight flight from Sydney will be popular with our customers who want to arrive in Hong Kong in the morning or connect to other flights in the region.”

Qantas’ Dreamliner carries 236 passengers across three cabins. It features the latest version of the airline’s Business Suite, nicknamed “mini First Class” by some frequent flyers, as well as a next generation Premium Economy seat and a significantly improved Economy seat with extra storage compartments and more legroom.

Qantas operates 28 flights per week to Hong Kong from Sydney, Melbourne and Brisbane.