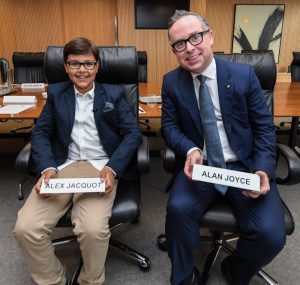 Qantas today announced it would form a partnership with fledgling local carrier Oceania Express – and start a behind-the-scenes program for budding airline executives – after a much-anticipated meeting between the two airline bosses in Sydney.

It follows 10-year-old Alex Jacquot’s letter to Qantas Group CEO Alan Joyce asking for advice on how to run an airline he founded during his school holidays. Mr Joyce wrote back to say he would be pleased to discuss further in person – an exchange that has since captured attention globally.

Speaking after the meeting, Mr Joyce said: “In his letter, Alex asked me to take him seriously. So we did. It’s hard not to be impressed by his enthusiasm. The aviation industry needs people who think big and Alex has that in spades. It was a pleasure meeting with him and his co-founders.

“We wanted to capture all that enthusiasm and formalise a connection between Australia’s oldest and newest airlines. Today we signed a memorandum of understanding for our airlines to cooperate from 2026*, once Alex has completed high school. It might be pushed out a bit if he chooses to go to university, which I hope he does.”

As part of the agreement, Alex was presented with a new logo, business cards and artist impression of the Oceania Express brand on a state-of-the-art Boeing Dreamliner. The domain name oceaniaexpress.com.au has also been registered on Alex’s behalf. Alex and his co-founders also received a tour of the Qantas Integrated Operations Centre, engineering facilities and one of its Airbus A380.

At the 30 minute meeting, the six airline executives discussed aircraft types, in-flight catering and the importance of a Frequent Flyer program. Improving passenger comfort on ultra long-haul flights was a focus, particularly given Qantas’ plans to fly direct from the east coast of Australia to London and New York by 2022.

“This is a big day for our little airline,” Oceania Express CEO Alex Jacquot said.

“We’ve got a lot to learn from them but they can learn from us, too. We’ve got some ideas about how to make long flights less boring. I like the Qantas inflight entertainment for kids but I think we can beat it,” added Mr Jacquot.

Since the exchange of letters between the two CEOs, Qantas has received scores of notes from other children with a strong passion for aviation. Mr Joyce said: “There are clearly a lot of budding airline executives out there, probably because it’s an industry that really captures the imagination. When we thought about the right way to respond these letters, we decided to start a program that gives the biggest enthusiasts the chance to come and see behind the scenes at Qantas. I have no doubt some will wind up working at Qantas one day.”

The ‘Qantas Future High Flyers’ program will offer a select number of school children the opportunity to experience a day in the life at the Flying Kangaroo in Sydney. The young aviators will meet engineers, pilots and head office staff as well as share their thoughts on how the customer experience can be improved. The program will be timed with school holidays later in 2019.