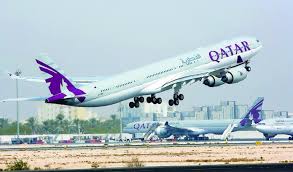 Qatar Airways was pleased to be a part of the exciting draw for the 2019 FIFA Women’s World Cup™, which took place on Saturday 8 December at La Seine Musicale, Boulogne-Billancourt in Paris. The draw determined the groups in which the 24 qualified teams will play during the FIFA Women’s World Cup France 2019.

The FIFA Women’s World Cup 2019™ tournament will be watched by many football fans around the world as the top teams compete from 7 June to 7 July 2019 across nine French host cities: Grenoble, Le Havre, Lyon, Montpellier, Nice, Paris, Reims, Rennes and Valenciennes.

Qatar Airways Group Chief Executive, His Excellency Mr. Akbar Al Baker, said: “We are delighted to be sharing this journey with the football teams and the devoted fans from each country participating in the FIFA Women’s World Cup France 2019™, as they gear up for the tournament next summer. As the Official Airline of FIFA, Qatar Airways looks forward to welcoming football fans from around the world to matches across France.

“Sport is a key pillar of the long-term vision of the State of Qatar, and as Qatar’s national carrier, we welcome the opportunity to bring people together for this exciting tournament next summer.”

Qatar Airways Senior Vice President Marketing and Corporate Communications, Ms. Salam Al Shawa, added: “Qatar Airways is proud to continue its journey of supporting FIFA tournaments and we are especially excited to be a part of the upcoming FIFA Women’s World Cup 2019™. The competition is one of the biggest global events in women’s sports and millions around the world are expected to tune in and watch these amazing women in action.”

The airline’s partnership with FIFA builds on its existing sponsorship strategy with premier sporting clubs around the world. Qatar Airways recently revealed multi-year sponsorship agreements with several sports entities, which includes being official airline sponsor of CONMEBOL professional football competitions across South America for the next 4.5 years including the Copa CONMEBOL Libertadores, Copa CONMEBOL Sudamericana and the CONMEBOL Recopa.

The award-winning airline operates a modern fleet of more than 200 aircraft to a network of more than 160 key business and leisure destinations across Europe, the Middle East, Africa, Asia Pacific, North America and South America. The airline recently revealed a host of upcoming new global destinations, including Gothenburg, Sweden; Da Nang, Vietnam and Mombasa, Kenya.