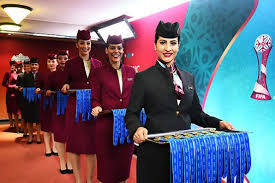 Qatar Airways extends its congratulations to Liverpool FC, who were crowned World Club Champions following their 1-0 victory over Flamengo at the FIFA Club World Cup Qatar 2019TM final in Doha on Saturday. It was an exciting 90 minutes full of drama at a full to capacity Khalifa International Stadium. The game went to extra-time before the deadlock was broken, with Liverpool netting the crucial goal to defeat the Brazilian club and lift the trophy. Qatar Airways cabin crew were on hand with the medals and trophies to support the ceremony.

Qatar Airways Group Chief Executive, His Excellency Mr. Akbar Al Baker, said: “I would like to congratulate Liverpool FC on being crowned FIFA Club World Cup Qatar 2019TM Champions. I would also like to praise the CF Flamengo team and their passionate, travelling supporters, for making the final such a memorable occasion. Over the last ten days we have enjoyed world-class football, packed stadiums and colourful, animated football supporters. As the national carrier of the State of Qatar, we were delighted to bring thousands of football fans from all over the world to watch the world’s best clubs. Qatar will be the stage once again for the FIFA Club World CupTM in 2020 and we now also look forward with tremendous anticipation to 2022, when the FIFA World Cup Qatar 2022TM will be hosted in our home country.”

Qatar Airways holds an extensive global sports portfolio, sponsoring top-level sporting events and some of the biggest football clubs around the world including AS Roma, Boca Juniors and FC Bayern Munich. As official FIFA partner, Qatar Airways sponsors the FIFA Club World Cup Qatar 2019™ and the FIFA World Cup Qatar 2022™, reflecting the values of sport as a means of bringing people together, something at the core of the airline’s brand message – Going Places Together.