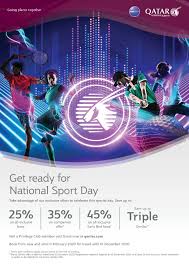 Qatar Airways hosted an enjoyable and exciting celebration of National Sport Day, featuring a variety of sports-based family activities for staff members from the group and its subsidiaries.

The event, which took place at the new, state-of-art Oryx International School Campus, featured a variety of fun-filled activities for Qatar Airways Group staff and families, including football, volleyball, basketball, cricket, cycling, aerobics and yoga, as well as a kids’ activity station featuring mini-football games and an obstacle course, where friendly competitions took place between employees.

Qatar Airways Group Chief Officer, His Excellency Mr. Akbar Al-Baker, said: “Qatar National Sport Day reflects the vision of our country’s wise leadership for building individuals and society. Its key message is that sports should be a part of the culture and life of individuals and society, and is an important aspect of our nation’s investment in human development.

“By hosting a fun and active day for our employees at our new, state-of-the-art Oryx International School, we are encouraging Qatar Airways staff and other members of the community to incorporate healthy lifestyles and habits, and helping foster a healthy and energetic way of living in Qatar.”

Qatar’s National Sport Day is celebrated each year on the second Tuesday of February in an effort to develop the country’s National 2030 vision, which encourages a healthy lifestyle by promoting sports, physical education and sustainable development in the State of Qatar. Qatar Airways strives to take part in fulfilling Qatar’s vision by hosting an annual event that encourages employees to live more active and healthier lives.

As the country’s national carrier, Qatar Airways continues to play a vital role in enhancing the already flourishing sports event calendar in Qatar through its sponsorship of tournaments Doha such as the PSA World Squash Championship Qatar, the Qatar Total Open 2020 tennis tournament, and the Qatar Cricket Tournament 2020.