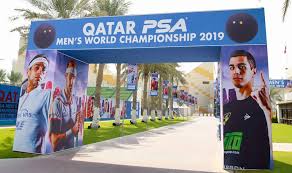 Qatar Airways is proud to be the Official Airline Partner of the PSA World Squash Championship Qatar 2019, taking place from 8 to 15 November at the Khalifa International Tennis and Squash Complex in Doha, Qatar.

The tournament will see top players from around the world gather in Doha to compete for a championship prize amounting to $335,000.

Qatar Airways cabin crew will present the winner’s trophy at the Award Ceremony on 15 November and a ticketing booth will also be available throughout the tournament to assist spectators with any flight ticket queries.

Qatar Airways Senior Vice President Marketing and Corporate Communications, Ms Salam Al Shawa, said: “Qatar Airways is delighted to again be the Official Airline Partner of the PSA World Squash Championship. As an airline, we are dedicated to connecting people through a shared love of sport, and this belief is reflected in the many world-class sporting events we sponsor globally. We are honoured to welcome back to Doha the world’s best squash players as we head into an exciting winter of sport in Qatar.”

Qatar PSA World Squash Championship Tournament Director Tareq Zainal said: “We are very proud to host the world once again in Doha at the PSA World Championship. Hosting the event for the fifth time is a remarkable achievement and it is a testimonial to the level of confidence the PSA has in us as host of this very important event. This Championship promises to be the best so far and promises to leave a lasting impression on every participant.”

Qatar Airways holds an extensive global sports portfolio, sponsoring top-level sporting events and some of the biggest football clubs around the world including AS Roma, Boca Juniors and Bayern Munich. As official FIFA partner, Qatar Airways sponsors the FIFA Club World Cup Qatar 2019TM which is taking place in Doha from 11 to 21 December and the FIFA World Cup Qatar 2022TM, reflecting the values of sport as a means of bringing people together, something at the core of the airline’s brand message – Going Places Together.

Qatar Airways currently operates a modern fleet of more than 250 aircraft via its hub, Hamad International Airport (HIA), to more than 160 destinations worldwide. The world’s fastest-growing airline has added several exciting new destinations to its growing network this year, including Rabat, Morocco; Izmir, Turkey; Malta; Davao, Philippines; Lisbon, Portugal; and Mogadishu, Somalia; and Langkawi, Malaysia. The airline will add Gaborone, Botswana in 2019 to its extensive route network along with Luanda, Angola; and Osaka, Japan, in 2020.