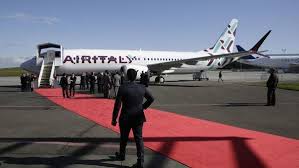 Since the acquisition on 28 September 2017 of a minority stake in Air Italy, Qatar Airways has strongly believed in the company and in its potential, supporting management’s proposed business plan with a view to improving Air Italy’s growth and job creation, with the addition of long-haul routes and numerous in-flight service improvements, in line with Qatar Airways’ globally renowned high standards.

Despite our minority shareholder’s role, Qatar Airways has continuously provided all possible support to Air Italy right from the beginning, from releasing aircraft from our fleet and ordering new aircraft for Air Italy, to backing management choices and injecting capital and investment as required and permitted.

Even with the changing competitive environment and the increasingly difficult market conditions severely impacting the air transport industry, Qatar Airways has continually reaffirmed its commitment, as a minority shareholder, to continue investing in the company to create value for Italy and the travelling public and to provide support for Air Italy and its staff because for Qatar Airways the focus on employees is a core priority in its strive for excellence – in addition to supporting local communities and other stakeholders.

For this reason, Qatar Airways was ready once again to play its part in supporting the growth of the airline, but this would only have been possible with the commitment of all shareholders.