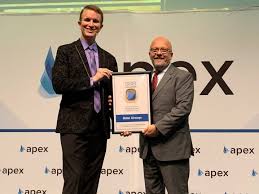 Qatar Airways is delighted to announce that it has been named as ‘Best Overall in the Middle East’ at the 2020 Airline Passenger Experience Association (APEX) Regional Passenger Choice Awards, held in Singapore on Wednesday 13 November 2019.

The award, which was received by Qatar Airways during the 2020 APEX Asia Awards Ceremony, was voted for by Qatar Airways passengers through the APEX Official Airline Ratings™ system using the world’s highest rated travel app, TripIt™.

Qatar Airways Group Chief Executive, His Excellency Mr. Akbar Al Baker, said: “The greatest voice and testament to our success is that of our loyal passengers, and to consistently receive the prized Passenger Choice Awards, both at a global and regional level, is a huge honour.

“We are thrilled to have yet further proof that Qatar Airways is the airline of choice for so many across the globe, and we look forward to continue to living up to our role as a ‘2020 Five Star Global Airline’ and welcoming more customers to the Qatar Airways experience.”

“This incredible accomplishment on top of Qatar Airways’ three 2020 APEX Global Passenger Choice Awards illustrates an incredible series of accolades given by verified, validated, and certified customer flights around the globe.”

The APEX Passenger Choice Awards and APEX Official Airline Ratings™ are based on passenger feedback gathered through APEX’s partnership with TripIt™ from Concur®, the world’s highest rated travel-organising app. Using a five-star scale, more than one million flights are rated by passengers across nearly 600 airlines from around the world.

Passengers rate their overall flight experience from one to five stars.  On the same screen, passengers are also given the opportunity to provide anonymous ratings in five subcategories: ‘Seat Comfort’, ‘Cabin Service’, ‘Food and Beverage’, ‘Entertainment’ and ‘Wi-Fi’. The single screen rating allows airline passengers to easily rate their flight in less than 15 seconds. The Passenger Choice Awards are independently certified by a professional external company hired by APEX.

In addition its success in the recent APEX global and regional awards, Qatar Airways was named ‘World’s Best Airline’ in the 2019 World Airline Awards, managed by Skytrax. It was also named ‘Best Airline in the Middle East’, ‘World’s Best Business Class’ and ‘Best Business Class Seat’, in recognition of its ground-breaking Business Class experience, Qsuite. It is the only airline to have been awarded the coveted ‘Skytrax Airline of the Year’ title, which is recognised as the pinnacle of excellence in the airline industry, five times.

Qatar Airways has added several exciting new destinations to its extensive network this year, including Rabat, Morocco; Izmir, Turkey; Malta; Davao, Philippines; Lisbon, Portugal; and Mogadishu, Somalia; and Langkawi, Malaysia. The airline will add Gaborone, Botswana in 2019 to the growing network, along with Luanda, Angola; and Osaka, Japan, in 2020.