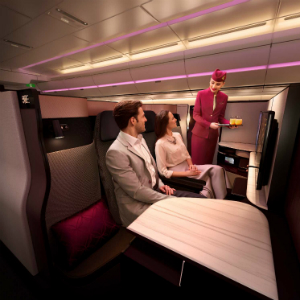 Qatar Airways received two awards from the Airline Passenger Experience Association’s 2019 Passenger Choice Awards  in Boston on Monday 24 September. The airline was named winner of the ‘Best Food and Beverages’ and ‘Best Cabin Service’ awards categories based on feedback from passengers of approximately 500 airlines around the world.

Qatar Airways Group Chief Executive, His Excellency Mr. Akbar Al Baker, said: “It is tremendously gratifying to receive two awards at the 2019 APEX Passenger Choice Awards. These awards represent our commitment as an airline to constantly improve our in-flight experience for each and every traveller flying with us.

“At Qatar Airways, we have made continuous efforts to make our customers’ experience a unique and memorable one, and we are delighted that passengers voted for us in the ‘Best Cabin Service’ and ‘Best Food and Beverages’ categories globally. We will continue to push the boundaries to redefine the passenger experience and set new standards across the industry.”

The APEX awards ceremony, held in Boston on 24 September, was attended by more than 5,000 industry professionals, as well as representatives from more than 100 airlines, and was hosted by Mr. Brian Kelly, CEO and Founder of The Points Guy.

The APEX awards are based on passenger feedback in different categories and recognise outstanding performance and passenger service offered by airlines globally.

Qatar Airways currently operates a modern fleet of more than 200 aircraft via its hub, Hamad International Airport (HIA) to more than 150 destinations worldwide. As part of its continued expansion plans, Qatar Airways plans a host of exciting new destinations throughout 2018, including Gothenburg, Sweden and Mombasa, Kenya, just to name a few.