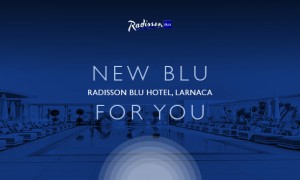 Radisson Blu, the upper upscale hotel brand that delivers positive and personalized service in stylish spaces, is proud to announce a new hotel opening – the Radisson Blu, Hotel Larnaca in Cyprus. One of the oldest continuously inhabited countries in the world, this destination is a perfect addition to Radisson Blu’s growing portfolio based in Europe’s most desirable travel hotspots.

Yilmaz Yildirimlar, Area Senior Vice President, Central and Southern Europe, Radisson Hotel Group, said: “We’re delighted to open our first Radisson Blu hotel in one of Europe’s favorite destinations, and a popular seaside retreat for visitors from around the world. As the third largest island in the Mediterranean, Cyprus attracts more than two million tourists annually, appealing to a wide range of travelers. With its strong identity and personality, the Radisson Blu Hotel, Larnaca is the ideal base for business travelers and those guests wishing to explore the country’s third-largest city and Cyprus’s glittering southern shores.”

Set in beating heart of the city center (and facing the sea), the hotel gives visitors the ability to discover both the modern and ancient sides of Larnaca’s culture – including its thriving sea port and waterfront lined with palm trees. It’s exactly the kind of iconic setting that resonates with the design heritage of Radisson Blu – especially with the stunning sea views available from the distinctive hotel building. Sunbathers and swimmers are also well catered for; the hotel is located just 2km from a gorgeous Mediterranean beach where they can spend the day relaxing on by the sea.

The hotel’s 106 rooms and suites showcase modern design highlighted with local flourishes. All rooms have a balcony with spectacular views of the vibrant coast and bustling harbor scenery. Guests are also in for a treat with a fitness center and an outdoor swimming pool that allows them to soak up the best of Cyprus in this amazing city.

When it comes to dining, the ultimate experience awaits guests on the fifth floor. Diners can enjoy the finest international cuisine (featuring locally inspired dishes) alongside panoramic views of Larnaca at the hotel’s remarkable restaurant. The Radisson Blu Hotel, Larnaca is also home to three different bar concepts – including the Lobby Lounge & Bar with its cosmopolitan atmosphere and the stunning Skybar on the 16th floor, which allows guests to unwind with ocean views and craft cocktails.

This presents an opportunity to enter the market with unprecedented business and meeting facilities, which will give Radisson Hotel Group the leverage to build on its award-winning Radisson Meetings offering. The hotel has a prime location in the city.

Beyond its gorgeous location, one of the stand-out features of the hotel is its modern meetings and events space, featuring 5 meeting rooms and a spacious conference room able to rise to any and every occasion. Part of the Radisson Hotel Group’s award-winning Radisson Meetings service, business travelers are guaranteed an event unlike any other – especially in the rooftop conference room with exactly the views you’d expect from such a vantage point.

Christos Kyriakides, General Manager of Radisson Blu Hotel, Larnaca said: “We’re honored to open the first Radisson Blu hotel in Larnaca, and in one of the city’s most vibrant and welcoming neighborhoods. My passionate and well-trained team is looking forward to providing new and returning visitors to the island of Cyprus with a brand-new world-class hospitality experience and the very best of our Yes I Can! service. To all travelers, we say: welcome to Larnaca – your gateway to exploringthe past, present and future of the magnificent island of Cyprus.”

Radisson Blu Hotel, Larnaca, will be operated by Radisson Hospitality AB under an international license agreement with Sunnyseeker Hotels, a rapidly expanding hotel chain that focuses in the field of Hotel Management.