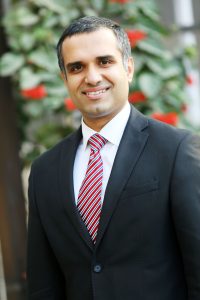 Vaibhav Sagar has been appointed as the General Manager of Radisson Hotel Agra. An adaptable & communicative hospitality leader with over 13 years of experience in hospitality & banking industry, Vaibhav is responsible for the team’s elicit performance, culminating in fine guest experience and achieving the vision of the hotel.

Vaibhav is a seasoned sales and marketing professional with a proven track record and multiple achievements at global & national level under his belt. With more than 13 years’ work experience, Vaibhav has worked across banking and hospitality sectors. An MBA in Marketing & Finance, Vaibhav has worked with hotel chains like InterContinental Hotels Group, Hilton Hotels & Resorts, IHHR Hospitality.

Vaibhav’s career journey has been dotted with multiple accolades. He was also invited as a speaker at the recently organized event by UBS Forums in New Delhi, where he spoke about key account management, one of his key strengths. He has also been awarded as the Global & National sales leader, South West Asia in 2016, Departmental leader of the year, South West Asia in 2017, etc.

Vaibhav firmly believes that hospitality is poised for greater growth in the coming times and is an unmatched industry to work with. He is fascinated by the infinite universe and drives his inspiration from there to excel and to go beyond the routine and challenge his own limits.