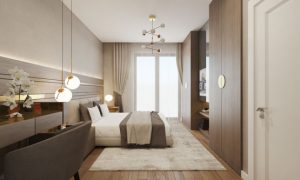 Radisson Hospitality AB, part of Radisson Hotel Group, is proud to announce the signing of the Radisson Residences, Vadistanbul Istanbul in Turkey. The 169-apartment residence is expected to open in the coming weeks, next to the newly opened Radisson Blu Hotel, Vadistanbul.

Elie Younes, Executive Vice President & Chief Development Officer, Radisson Hotel Group, commented: “We see a positive growth within the travel industry in Turkey. We’re delighted to bring another stunning property – as well as the first hotel apartments project under the Radisson brand – to the upcoming business hub of Vadistanbul, located in the heart of Istanbul. Again, we thank our partners for their continued trust and for this strategic addition. With this property, Radisson Hotel Group cements its position as the leading upper upscale operator in Istanbul, with 15 properties in the city.”

The newly built property will consist of 169 modern apartments, split equally between one- and two-bedroom apartments – as well two unique four-bedroom apartments. The hotel will also have a well-equipped gym and a SPA, including a swimming pool to accommodate both short- and long-term stays.

The hotel is located in Vadistanbul, a new residential district in the north of the European side of Istanbul. With its proximity to Maslak, one of Istanbul’s main business districts, the residence is expected to attract both business travelers and leisure guests seeking stylish accommodation in a central location.

Vadistanbul is a modern and dynamic residential project that includes a specially developed monorail system with a direct connection to the metro network. The Radisson Residences, Vadistanbul property will be situated on the boulevard of Vadistanbul that will also be home to a fourth-generation shopping mall, 270 retail outlets and offices for 20,000 people.

The hotel will be approximately 20 minutes’ drive from the new Istanbul Airport, and only 400m from the nearest exit of the Trans-European Motorway (E80), linking the hotel to both the existing and the upcoming airport.