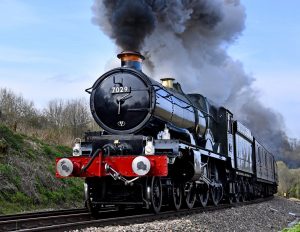 Steam fans are being warned to keep a safe distance from a rarely used railway line this weekend when heritage locomotive Clun Castle makes a special journey through Shropshire.

The steam engine will travel down the Coalbrookdale branch line on Sunday June 9, which hasn’t seen regular trains since the closure of Ironbridge power station in 2015.

As well as making local people aware a train will run along the mothballed line, spectators hoping to catch a glimpse of Clun Castle are also being urged to do so safely.

Network Rail’s message comes after recent dangerous and illegal behaviour during tours of Flying Scotsman elsewhere in the country.

Photographs shared online showed crowds of people, including young children, illegally trespassing on the tracks and stood in the path of oncoming trains.

Trespass on the railway is a criminal offence with up to a £1000 fine. Train obstruction is also against the law with a penalty of up to two years in prison.

Lisa Lewis, Network Rail community safety manager, said: “We’re expecting hundreds of people to turn out to watch Clun Castle travelling through the picturesque setting of Ironbridge Gorge. While it’s great people will want to experience and photograph the train, it’s vital for them to stay safe.

“The railway is full of both obvious and hidden dangers and it’s never acceptable for the public to trespass onto the track for any reason. Our message is simple: enjoy the spectacle of this train, but please do that from a safe place.”

Extra staff will be placed at level crossings along the route and Network Rail has been working with British Transport Police to ensure everyone stays safe on the day.

Organisers, from the heritage rail operator Vintage Trains, are advising the best place to see Clun Castle in all its glory is as it travels over the Coalbrookdale viaduct running alongside the Abraham Darby ironworks.

Denis Chick, from Vintage Trains, said: “We’re proud to be running what could be the last ever passenger trains through the heart of Britain’s historic iron industry in Coalbrookdale with Clun Castle. We have to ensure everyone enjoys this special event safely, and we’ve been working closely with Network Rail in the run up to this weekend to ensure it’s an event to remember, for all the right reasons.”

Aerial photographers are also being reminded about the strict rules of flying drones over railway lines which is a growing cause for concern on the UK rail network.

Unauthorised and dangerous drone use is illegal on, over or within 50 metres of the railway and those prosecuted face a fine of up to £2,500.