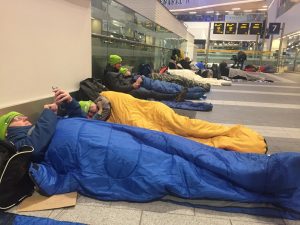 More than 150 people have braved sub-zero temperatures to spend the night on station concourses to support the Railway Children charity.

In four of Britain’s major stations – Liverpool Lime Street, Manchester Piccadilly, Birmingham New Street and London Bridge – the hardy volunteers slept last night (31 Jan) in aid of vulnerable children who run away from home both in Britain and abroad.

Network Rail and the wider rail industry teamed up with the Railway Children charity to raise money and awareness for the work being done which helps thousands of children every year.

Directors from Network Rail, train companies, rail industry partners and politicians, took part in the sleep out, which was sponsored by Virgin Trains, to help raise £25,000 for the charity.

Martin Frobisher, Network Rail’s route managing director for the London North Western route, who spent the night at Manchester Piccadilly, said: “As an industry, with thousands of staff in stations across Britain, we are often the eyes and ears who can spot distressed children and young people and help get them the support they need.

“On one of the coldest nights of the year so far, the sleep out was a sobering reminder of how important it is to raise money for the Railway Children charity so it can continue to provide much-needed and valuable services.”

Pete Kent, programme director for the Railway Children charity, said: “We’re so pleased with how well this event has gone and how the whole rail community has come together to support it. It was pretty cold but spirits remained high and although I’m not sure how much sleep anyone got, it certainly highlighted the issues that we’re fighting for at the same time as raising vital funds to help us keep reaching the children that need us. We definitely want to make this a regular event in the Railway Children calendar so look out for next year’s sleepout.”

Natasha Grice, executive director of people at Virgin Trains, said: “We’re delighted to have sponsored the Big Sleepout for Railway Children – a charity we’ve supported for many years. The experience of sleeping out for just one night helped us appreciate in a very small way some of the many challenges vulnerable children face on a daily basis – particularly in such extreme cold weather. It was a privilege to be able to join our colleagues from the whole rail industry to help raise the funds Railway Children needs to continue their vital work supporting and protecting vulnerable children and young people.”

More than 150 people took part at the four stations including the Mayor of the West Midlands, Andy Street, at Birmingham New Street, and the Metro Mayor of the Liverpool City Region, Steve Rotheram, at Liverpool Lime Street.