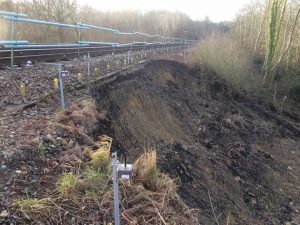 Work is underway to reopen the railway between East Grinstead and Lingfield by 30 March after two landslips blocked the line.

There have been two landslips between Dormans and East Grinstead, where the railway lies between a remote woodland, south of Wilderness Lake.

The first landslip happened on 28 December, but we were able to continue running trains with a speed restriction. Network Rail engineers began working on a plan to shore up the line, but Storms Ciara and Dennis damaged the embankment even more and we had to close the line for safety reasons.

Works to repair the slip involve building an 800-metre-long road just to reach the site, due to its remote location. Steel beams will be driven into the ground to build a wall to repair the embankment, and Network Rail engineers will be using a range of equipment including cranes and road-rail vehicles.

Almost 25,000 tonnes of new material needs to be brought in to replace the soil lost in the slips and will be delivered to site on 25 separate trains. Once the railway is open to trains, more work will be done to shore up the section in between the two landslips when it is less disruptive to passengers.

“I really appreciate how passengers are having their journeys affected by this landslip. I want to assure them we are challenging each other and reviewing our plans constantly to see if we can get this railway open at the earliest opportunity before 30 March.

“I really appreciate everyone’s patience while we do this work.”

“We understand the difficulties our passengers are facing due to this landslip and we’re doing our very best to keep people moving during the closure.

“We have additional car parking at Lingfield and Gatwick Airport, rail replacement bus services from East Grinstead to Three Bridges and Lingfield, and our tickets are being accepted on many local buses and other train services.

Two trains per hour are running between Lingfield and London Victoria and during peak times, three 12-car Thameslink trains between Oxted and London Bridge are running. Rail replacement bus services are also in place between Hurst Green and East Grinstead.