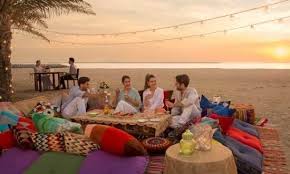 U.S. travelers are discovering the wonders of the Emirate that has been recently named the &quot;Gulf Tourism Capital,&quot; Ras Al Khaimah. Ras Al Khaimah has stood out as the place to visit for the U.S. population, reaching nearly 10,000 total U.S. visitors in 2018, marking more than a 16 percent
increase in tourists visiting the Emirate last year.

The increase in tourists from the U.S. year-over-year is an evidence of the
region's most recent recognition and the broad array of tourist attractions within the Emirate. Home to the Guinness World Record-breaking New Year's fireworks display and the world's longest zipline, Ras Al Khaimah is quickly becoming the finest adventure tourism destination in the region.

The Emirate is also known for its efforts in advancing sustainable
development and supporting the post-oil economy, increasing tourist
facilities and providing advanced innovative tourism services across the
UAE.

This month, Ministers and senior officials held a meeting to organize
tourism efforts within the Gulf Cooperation Council, GCC, countries. There
was an UAE delegation led by Mohammed Khamis Al Muhairi, Advisor to
the Minister of Economy for Tourism Affairs, on behalf of Sultan bin Saeed
Al Mansouri, the Minister of Economy.

The World Tourism and Travel Council has said that the tourism sector
made up 11.1 percent of the UAE's GDP in 2018, amounting to AED164.7
billion (USD44.8 billion). This contribution is expected to rise by three
percent this year, and tourism generated 9.6 percent of total jobs in 2018,
corresponding to around 611,500 positions. This percentage is expected to
rise further.