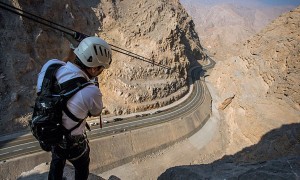 In response to visitor demand for the world’s longest zipline, Ras Al Khaimah Tourism Development Authority  announced that  they will open phase two to visitors in the third quarter of 2018.

Two new cables will increase the capacity of the Jebel Jais Flight to 400 people per day, around 200,000 per year.

The Tourism Authority at ITB in Berlin announced that night time ziplining will commence this summer and  give the visitors an opportunity to enjoy a different experience during the summer months.

The latest tourism product the world’s longest zipline is aimed at attracting the adventure tourist to the UAE’s northern most Emirate.

Visitors to Ras Al Khaimah, increased by 19 per cent in 2017, with growth from international markets.

The strategic partnerships will be further strengthen by RAKTDA and agreements at ITB with the global tourism market will aid its goal of a million visitors by the end of 2018 and 2.9 million by the end of 2025.