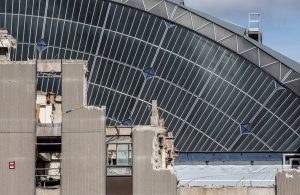 More than 95 percent of the demolition material produced during the redevelopment of Glasgow Queen Street station has been recycled.

With the station currently being rebuilt to accommodate longer, greener electric trains, the project team has been working hard to make sure the reconstruction works are delivered in an environmentally friendly way.

Network Rail and contractors Balfour Beatty and Dem-Master have ensured that 100 percent of the brick, timber and concrete removed from the site during the demolition work has been recycled for re-use elsewhere in the construction industry.

In total, 14,000 tons of redundant material has been removed from Queen Street by the project and recycled into a range of sectors including house and road building projects and the bio-mass industry.

Some of it, in the form of brick and concrete which had been crushed into small stone, even returned to Queen Street for re-use on-site as part of the base layer for the new station.

The team also significantly reduced the carbon footprint of the demolition works by carrying out the recycling work within Glasgow.

The only materials not considered for recycling were those containing hazardous substances such as asbestos.

Tommy McPake, Network Rail programme manager for Queen Street, said: “Demolishing the redundant building in the heart of Glasgow city centre, and without closing the station, was extremely challenging for the project team.

“We are pleased to have been able to ensure that nearly all of the material removed from the site has been recycled.

“When complete, the new station will transform travel through Queen Street – allowing longer and greener electric trains to use the station and providing customers with a brighter, more modern station building.”

The £120m Scottish Government-funded redevelopment of Scotland’s third-busiest station will be completed in 2020.

A new glass-fronted concourse, almost double the size of the existing space, is being built to accommodate predicted increases in future passenger numbers, and platforms two to five are being extended out towards George Square, taking up most of the space covered by the train shed roof.

The new concourse design is fully accessible with entrances on George Square, Dundas Street and North Hanover Street and is filled with natural daylight. The listed Victorian roof has also been carefully incorporated into the new structure and is fully exposed when viewed from platforms.