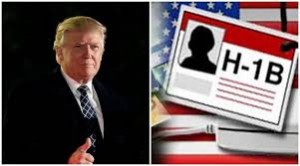 Foreign workers in the US, especially Indians were relieved as the Trump administration announced not considering any proposal that could lead to deportation of thousands of H-1B visa holders by denying them extensions beyond the maximum permissible period of six years.

Jonathan Withington, chief of media relations for the U.S. Citizenship and Immigration Services, said that what can they say, however, that USCIS was not considering a regulatory change that would force H-1B visa holders to leave the United States by changing their interpretation of section 104(c) of AC-21, which provides for H-1B extensions beyond the 6 year limit.

He further mentioned that even if it were, such a change would not likely result in these H-1B visa holders having to leave the United States because employers could request extensions in one-year increments  to be considered under section 106(a)-(b) of AC21 instead.

Withington further mentioned that that USCIS was never considering a policy change and that any suggestion that USCIS changed its position because of pressure was absolutely false.

The recent announcement was a breather for Indian H-1B visa holders waiting for their Green Cards who were at risk of deportation if there was a proposal to end granting extension to visa under the programme was accepted.

The proposed US Bill as reported earlier was in alignment  with President Donald Trump’s “Buy American, Hire American” policy and would have lead to mass deportation of 500,000-750,000 H-1B visa holders.

However it was opposed by several major Indian IT companies working in the US.

The US Chamber of Commerce stated that the policy would harm American business, their  economy, and the country.

Around 85,000 non-immigrant H-1B visas every year is granted by the US – 65,000 to foreigners hired abroad and 20,000 foreigners enrolled in advanced degree courses in US schools and colleges.

Approximately 70 per cent of these visas go to Indians which are hired mostly by IT companies.