Home » At Republic Day 2020, the Brazilian President would be the chief guest

At Republic Day 2020, the Brazilian President would be the chief guest 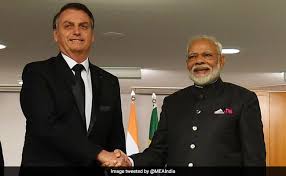 Jair Bolsonaro, the Brazilian President has accepted Indian Prime Minister, Mr. Narendra Modi’s invitation to be the Chief Guest at the Republic Day celebrations in 2020 in New Delhi, India.

On Wednesday, Prime Minister Modi met Bolsonaro on the sidelines of the 11th BRICS Summit, which will be organized in Brasilia.

The Prime Minister Modi while attending the meeting with Bolsonaro, invited him to be the chief guest at the Republic Day in 2020. Bolsonaro accepted the invitation with pleasure. “Both leaders agreed that on this occasion, the two countries can comprehensively enhance our strategic partnership,” an official statement said.

Last year was significant as leaders of the 10 ASEAN nations took part in the event as chief guests.

Modi and Bolsonaro had “fruitful talks” that would fortify the bilateral relations.

Modi explained that he looked forward to talk regarding trade. Also, he highlighted the areas for possible investment from Brazil, including in areas of agricultural equipment, animal husbandry, post-harvest technologies and biofuels, the statement said.

The Brazilian President showed his willingness and informed Prime Minister, Modi that a large business delegation will escort him to India, it said, adding that the two leaders also discussed other areas of cooperation including space and defense sectors.