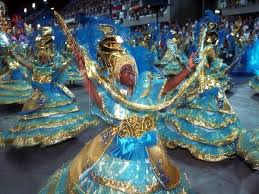 The glitz, glamour, and festivity of Rio carnival in Brazil is currently under warning in regards to contaminated water summer about to reach its peak.

As per Fox News, taps and showers are releasing murky water with a distinct clay-like smell.

A persistent issue that started from the beginning of January 2020 is anticipated to get further exacerbated as 10 million tourists will come next week to Rio de Janeiro for the annual carnival.

State Company of water and sewage (CEDAE) — Rio’s public water authority– has expressed their regret and attributed the problem to the presence of “geosmin”, a supposedly safe organic chemical compound.

“Geosmin” is considered to proliferate in nutrient-rich water bodies that get exposed to untreated sewage, and is non-toxic, however, some beg to differ.

As per Ana Passos, a biologist, “if the water is not odorless, colorless and tasteless is not safe”.

On February 3rd, the water crisis reached its lowest point when the Guandu water treatment plant stopped because of contamination caused by massive quantities of a certain type of detergent.

Majorly, it’s still not clear from where the chemical originated, but it is believed that it seeped in from industries situated outside Rio due to heavy rainfall.