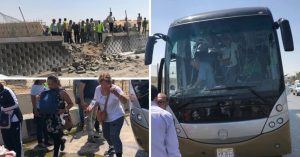 17 tourists were injured when a roadside bomb exploded near the Grand Egyptian Museum fence as the tourist bus was passing by, in Cairo. Most of the injuries were caused by broken glass falling on to the group. Among those injured were 10 Egyptians and 7 South African tourists. Giza bomb blast would prove to be the spoke in the wheels of Egyptian tourism growth.

The bus to Cairo-based Meryland Tours was provided by the Egypt based Dominant Travel. The explosion also ripped a hole through a nearby wall, close to the construction site of the Grand Egyptian Museum. The museum is scheduled to open next year attracting more visitors to the Pyramides.

Images showed shocked tourists, one with a bloodstained T-shirt, disembarking a bus with its windows blown out and the windscreen cracked.

The museum, still under construction, is set to be the largest archaeological museum in the world when it opens in 2020. It is located approximately two kilometers from the Giza pyramids.

The Giza bomb blast marks the second attack on tourists in Egypt in just six months. In December 2018, three Vietnamese tourists and a local tour guide were killed after their bus was targeted by a roadside bomb near the Giza pyramids.