Roughly 400,000 Chinese have called off their group tours to Japan 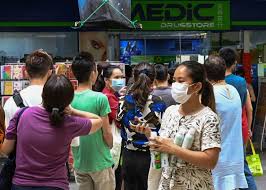 Tourism and retail industries are rolling from the spread of coronavirus as thousands of Chinese tourists are calling off their group tours to Japan.

The Chinese calling off their reservations through March have almost reached 400,000, as per a recent study by the Japan Association of Travel Agents (JATA), an industry group.

The statistics would increase even more if travelers from China who had planned for a Japan tour on personal and business trips are counted, the JATA added.

The outbreak of the virus causing a pneumonia-like disease in Wuhan came before the Lunar New Year holiday of China from Jan. 24 to Jan. 30, when Chinese travel in and out of the country extensively.

Their absence has affected the bottom lines of Japanese hotels and department stores, which depend on Chinese tourists spending power.

Shizuoka Prefecture, with famous hot springs and scenic spots, is one of hard-hit prefectures, with Chinese accounting for 60 percent of its foreign visitors.

A Japanese-style inn in the Kanzanji hot spring resort in Hamamatsu in the prefecture reported that there are zero reservations from Chinese in terms of group tours for February and March.

“This is really unfortunate as Chinese tourists have begun staying in our inn only recently,” a female employee lamented.

Japanese department stores that anticipated a massive arrival of Chinese tourists are witnessing a slump in their sales.

Chinese account for 80 percent of the purchases by international tourists at the three well-known department stores like Daimaru-Matsuzakaya, Takashimaya and Mitsukoshi-Isetan.

Tags: Chinese have called off their group tours