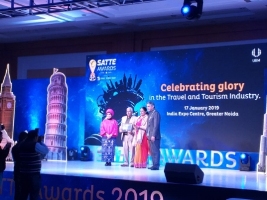 Royal Caribbean International, exclusively represented by TIRUN Travel Marketing in India won the award for Best Cruise Line at the SATTE Awards powered by T3, organised by UBM India alongside SATTE Exhibition. The 3rd edition of the event took place at India Expo Mart, Greater Noida on 17th January, 2019. The ceremony saw the attendance of industry leaders, influencers and recognized names from the travel and tourism sector including government bodies.

SATTE, South Asia’s leading B2B travel and tourism trade exhibition, has worked its way to become a catalyst for the Indian travel and tourism sector and has been seeing an overwhelming response from Indian and global players, each visiting the event with high expectancy from the event and its offerings.  Royal Caribbean International’s best-in-class cruise ships offering a vast list of itineraries to the best destinations in the world -from party spots to unexplored lands- garnered unanimous praise from the attendees, and the award further underlined the cruise line’s creative marketing initiatives and the new technologies brought in the cruise line.

Commenting on the achievement, Mrs Ratna Chadha, Chief Executive of TIRUN Travel Marketing said, “It gives us immense joy and pride at Tirun to be a part of Royal Caribbean International as it climbs the ladder of success. Receiving an award at the prestigious SATTE Awards adds to the glory specifically so as it is known to honour and recognize excellence and the outstanding achievements of players who innovate in order to create new benchmarks in the travel industry. “

To make itself more relevant to the Indian Cruise Travelers, Royal Caribbean International, has announced its India Sailings in line with the increasing demand for cruise tourism witnessed in India. These cruises include, Explorer of the Seas and Spectrum of the seas, launching in April,2019 will be the largest ship to come to India. These India sailings are due in April and May, coinciding with travel season.