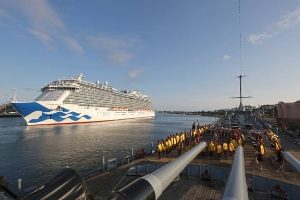 At the Port of Los Angeles today a Royal Princess arrived – that is, the 3,560-guest Princess Cruises ship – now here to take travellers to sought-after destinations including the Mexican Riviera, the California Coast and Alaska. In celebration of Royal Princess’ maiden call to the Port of Los Angeles and the cruise line’s biggest West Coast cruise season, a “Royal” fanfare marked the occasion highlighting the arrival of one of Princess Cruises’ newest and most elegant ships.

Princess Cruises has the longest history of any cruise line to sail from the Port of Los Angeles, not to mention its celebrity status as the ocean-going co-star to the many exciting stories of romance and adventure on the high seas that were told on the hit TV series, “The Love Boat.”

To mark the ship’s maiden call and celebrate her West Coast season, the iconic University of Southern California Trojan Marching Band, under the direction of Dr. Arthur C. Bartner, provided pageantry and fanfare for guests sailing on Royal Princess from a grand location onboard Battleship IOWA. As Royal Princess departed and sounded its “Love Boat” harmony-tuned horn, the USC Marching Band then played back the beloved theme song.

Guests and well-wishers were then treated to a fireworks display as Royal Princess departed on her very first seven-day Mexican Riviera cruise – the same itinerary made famous by Princess and “The Love Boat.”

Royal Princess sails weekly to the Mexican Riviera from Los Angeles (San Pedro) now through April 27, then sails north to Vancouver for a season of Alaska cruises exploring The Great Land before returning to Los Angeles in September where the ship will homeport for six months, continuing cruises to Alaska, the Mexican Riviera and the California coast.

Royal Princess is a MedallionClass ship powered by the OceanMedallion, the most advanced wearable device in the global hospitality industry, delivering a hassle-free, personalized vacation that gives guests more time to enjoy what they love most about cruising.

Award-winning features aboard Royal Princess include the large atrium or “Piazza,” offering enticing entertainment and culinary delights; the overwater SeaWalk – a 60-foot-long glass walkway standing 128 feet above the ocean; an expansive Lotus Spa and adults-only Retreat Pool and Sanctuary.

Royal Princess first debuted in Southampton in June 2013, and was officially named by Her Royal Highness, Catherine, The Duchess of Cambridge. The original Royal Princess (1984) was christened by Princess Diana.