Home » Russia to get its first Radisson Hotel

Russia to get its first Radisson Hotel 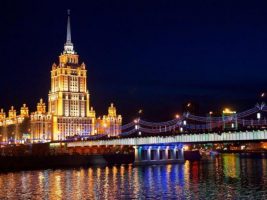 Russia will get its first Radisson Hotel in the Urals region, which is slated to be opened in 2021.

The hotel will be situated in the heart of Perm. The Baptist Church, Perm Medrese and Perm Mosque will be within walking distance of the hotel while the Perm Opera and Ballet House will be only 900 metres away.

The Radisson Hotel Perm would have as many as 150 rooms.

Guests will find Scandinavian-inspired hospitality with Radisson’s unique features. The hotel will also have a gym, a swimming pool on the top floor beside an all-day restaurant on the 21st floor, which will offer the highest points of the city.

The business travellers will have access to conference facilities with meetings and services managed by the hotel officials.

Perm International Airport will be 19 km away from the hotel and the railway station will be just 3.5 km away.

The addition of the new hotel will take the number of Radisson Hotel to 39.

The executive vice-president and chief development officer of Radisson Hotel Group, Elie Younes, said the first-ever Radisson Hotel in Russia will strengthen its reputation among guests.

He said that the location of the hotel would be as such that guests coming to the facility would easily explore the tourist hot spots.