Sabre outage forces check-in delays across the US and Canada 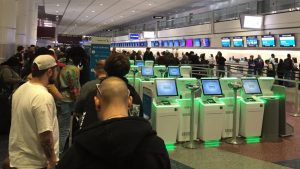 Sabre outage caused check-in delays for thousands of air travellers across the United States and Canada on Tuesday. Sabre provides technological solutions for reservations, printing bag tags and check-in at the airports. A system issue or computer glitch affected the check-in process at multiple airports.

Both American Airlines and JetBlue acknowledged that the outage was caused by an outside source, apologizing to customers in the process.

Reports of a problem started at around 9 a.m. ET, but truly reached a fever pitch two hours later when an increasing number of passengers were not able to board their flights.

The temporary Sabre outage made it difficult for passengers flying on airlines such as JetBlue, American, and Alaska Airlines to check in for flights or pass through security at airports.

Gate agents had to ask passengers for paper boarding passes, which have become a thing of the past.

In a tweet shortly after noon, the airline said: “All JetBlue systems are being restored following a temporary outage of Sabre’s systems which impacted multiple airlines. We apologize for the inconvenience. Please try again shortly.”

Sabre said that operations were normal since Tuesday afternoon. Technical teams were immediately engaged. In a statement it said: “We apologize for this inconvenience to those affected.”