Sandstorm in the Canary Islands strand thousands of passengers 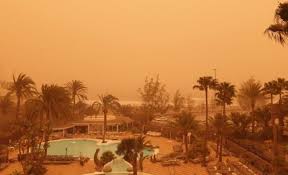 Standstorms across the Canary Islands has led to travel disruption, thousands of British holiday makers and many experiencing half-term breaks are scattered at the airports across Europe.

On Saturday afternoon problem started on the island of Gran Canaria when the runway was closed due to the quantity of airborne sand sweeping in from the Sahara.

To the other Canary Island airports at least 17 aircraft were diverted.  At Fuerteventura a Jet2’s flight from Birmingham landed and at Tenerife South the Tui arrival from Cardiff touched down while a Norwegian’s flight from Gatwick turned around over the Bay of Biscay and returned to the Sussex airport.

It was found that easyJet’s Bristol departure went as far as Lisbon before heading back to its starting point.

As the passengers arrived to take their flights home the biggest problem were at Las Palmas airport on Gran Canaria.

The runway was closed and there was no indication about their departure.

The European air travel rules states that the airlines are responsible for providing hotel accommodation and meals for passengers whose flights are delayed regardless of the cause of delay.

Tui mentioned that it was following the regulation to the letter. A spokesperson apologized to the customers whose flights were impacted due to the adverse weather conditions in Gran Canaria on Saturday 22 and Sunday 23 February.

They could provide as many customers as they could with overnight accommodation and everyone was provide with food and drinks and was also supported by the TUI reps.

However, some travellers dispute the company’s assurances.

James Lear said that there are literally hundreds of people who would disagree with that as Lear along with the son has to wait almost for a day at the airport for the Tui flight to Cardiff.