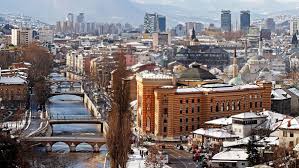 Mujo Fiso, minister of transport of Bosnia & Herzegovina, and the president of City Sightseeing, Enrique Ybarra together inaugurated the new City Sightseeing operation in Sarajevo.

The leading city tours company will open its first operation in the Balkans following an investment of €1.6 million and a fleet of eight double-decker buses.

Visitors will get a 27-stop tour where they will be able to hop on and off a double-decker tour bus by the new City Sightseeing to discover the main attraction located in the capital of Bosnia and Herzegovina.

The visitors can travel as many times during the validity of the ticket.Sarajevo is  known for its cultural diversity and its rich history.The neo-Gothic Cathedral of the Sacred Heart, the Gazi Husrev-beg Mosque are the largest mosque in the country.

Other emblematic monuments like the Sebilj Fountain or the streets of Old Sarajevo, are a testament to the coexistence of various religionYbarra thanked the minister of transportation and said that he was sure that they will help showcase to the world what a wonderful destination has joined their global network.