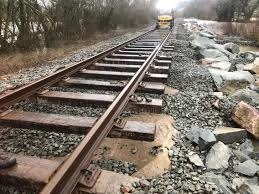 Network Rail has made additional progress in repairing the railway network across the Wales and Borders route following Storm Ciara, Storm Dennis and additional rainfall this week.

The Abergavenny to Hereford line reopened earlier this morning (Saturday), ahead of the Wales V France game. The only other lines affected is the line between Abercynon and Aberdare, with partial reopening due on Monday morning, and the Conwy Valley Line in north Wales. All other closed lines have now reopened.

As of this morning (Saturday 22 February), the affected lines include: