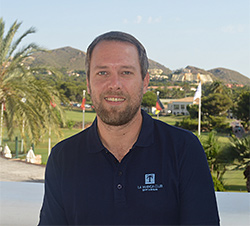 International hotelier Andreas Schandl will bring his vast global experience to bear to deliver a fresh new flavour to La Manga Club after being appointed as the new director of food and beverages at the top Spanish resort.

Schandl, who spent two years working as a restaurant assistant at the resort earlier in his career, has returned to La Manga Club to take over overall responsibility for the venue’s hospitality and catering sector, which includes more than 15 bars and restaurants.

The German has a wealth of knowledge of the global food and beverages industry having worked for some of the world’s top luxury hotels and resorts over the last 13 years.

Having enjoyed high-profile positions at the likes of the MGM Grand hotels in Las Vegas, Vietnam and China and Marina Bay Sands Hotel in Singapore, Schandl progressed to working at the Kempinski Grand Hotel des Bains in St.Moritz, Switzerland, before his most recent role as food and beverages director at Eden Roc Cap Cana in the Dominican Republic.

Nick Montgomery, general manager at La Manga Club, said: “With great leadership skills and a fantastic knowledge of the international hospitality industry, Andreas was the perfect candidate for the job.

“It’s a pleasure for La Manga Club to welcome someone of his calibre to the team. Andreas has some very exciting ideas on how we can further upgrade the culinary experience at the resort, and I’m sure he will prove to be a real asset in the months and years to come.”

Situated in Murcia, south-east Spain, La Manga Club has set the benchmark for sports and leisure destinations across Europe for more than 45 years.

Widely regarded as Spain’s flagship resort, the venue has won numerous leading accolades in recent years, including being named as ‘Europe’s Leading Luxury Resort & Villas’ for the third year in a row at last month’s World Travel Awards as well as retaining its title as ‘Europe’s Leading Sports Resort’.